The last decade has seen a huge spike in secular applications of mindfulness, the practice of focusing our attention on our thoughts, feelings, and environment in the present moment. While the first wave of mindfulness-based programs were for adults, more recent efforts have targeted the well-being of children and adolescents; as a result, mindfulness programs in schools are becoming more and more widespread.

But until recently, “enthusiasm for promoting such practices [outweighed] the current evidence supporting them,” to quote a 2012 review of the research on mindfulness practices with children and youth. That has changed in the past year with a spate of new studies: Researchers have been aggressively testing the effectiveness of school-based mindfulness programs, and they are starting to publish their results.

Here is a round-up of studies published just within the last few months. 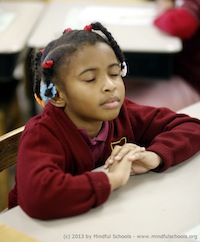 A student participating in the Mindful Schools program.

The curriculum of the Oakland-based Mindful Schools program, which serves low-income, ethnic-minority elementary school students. The Mindful Schools curriculum lasts five weeks, with three sessions per week, and focuses on mindfulness practices that help children pay attention, build empathy and self-awareness, improve self-control, and reduce stress. More than 400 students were evaluated in total in this study.

Immediately after the program ended, student behavior improved significantly in all four areas measured—paying attention, self-control, classroom participation, and respect for others—and these gains were maintained seven weeks later. Though this study is limited by the lack of a true control group—i.e., the researchers don’t know whether other students at the school might have shown the same improvements, even without the Mindful Schools training—it is one of the largest studies of a school-based mindfulness program to date. Its findings have exciting implications for the potential of mindfulness training to benefit underserved elementary school students.

The feasibility of an eight-week mindfulness-based program called Move-into-Learning (MIL), administered to two classrooms of third graders at a low-income, urban elementary school in the Midwest. The MIL program involved a weekly 45-minute session, led by an outside trainer, that included mindfulness meditation, yoga and breathing exercises set to music, and positive self-expression through writing and visual arts. In addition, the two classroom teachers led shorter, daily practice sessions that reinforced those skills.

At the end of the eight weeks, teachers observed significantly less hyperactive behavior, ADHD symptoms, and inattentiveness among their students; these improvements were maintained two months later. In fact, students continued to show improvements in their attentiveness even after the program had ended. What’s more, interviews with the participating teachers revealed that they found the program to be feasible to implement, appropriate and enjoyable for their classrooms, and beneficial for students’ attendance and behavior. These promising preliminary results seem to warrant larger, more rigorous studies of the program.

After the program ended, students were asked what changes they had noticed since beginning to practice meditation. From eight types of potential benefit identified by the study’s authors, those rated as most important by the students were stress relief and enhanced school climate, including through improved teacher mood. Although further study is needed, these results indicate that high-risk adolescents can sense the benefits of mindfulness meditation after just brief exposure to the practice. 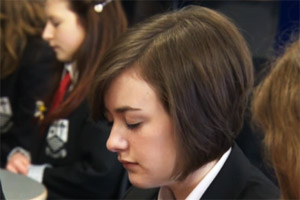 A student participating in the UK-based Mindfulness in Schools Program (MiSP).

The acceptability and effectiveness of a British program for students ages 12 to 16 called the Mindfulness in Schools Program (MiSP). The MiSP curriculum consists of nine scripted mindfulness lessons, delievered weekly by trained classroom teachers. In this study, involving over 500 kids total, six schools receiving the MiSP program—and whose teachers had already been trained in the program—were matched with six similar schools where teachers had expressed interest in mindfulness but had not been trained in MiSP.

Compared to students in the non-MiSP schools, MiSP students reported significantly decreased depression symptoms immediately after the end of the program. In follow-up surveys conducted three months after the program ended, during the stressful summer exam period, MiSP students reported significantly less stress and symptoms of depression and significantly greater well-being compared to their non-MiSP counterparts. Also, the more frequently students reported using mindfulness practices, the better their scores were. These results indicate that the MiSP, and mindfulness in general, shows promise as a tool to bolster adolescent mental health, and possibly their academic achievement as well.

Although much of this research is in its early stages and the conclusions we can draw from it so far are limited, these four studies, conducted in different locations and with diverse types of students, suggest the great potential of mindfulness programs to improve the well-being of children and adolescents. Ideally, these and other researchers will next develop even more rigorous studies, comparing groups of students who are randomly assigned to participate in a mindfulness program with those randomly assigned to a group that doesn’t receive the training. In the meantime, educators who are interested in mindfulness have many programs to choose from and an increasing amount of research to support their enthusiasm.

Emily Campbell is an education research assistant at the Greater Good Science Center and a Ph.D. student in Human Development and Education at UC Berkeley.

If you want to learn more about mindfulness in schools, you may want to read "Five Things That Need to Happen to Bring Mindfulness into Education." In the article, Tish Jennings, Assitant reserach professor at Penn State in the CARE (Cultivating Awareness and Resilience in Education) for Teachers program, examines the research and initiatives thus far and talks about what needs to happen next.